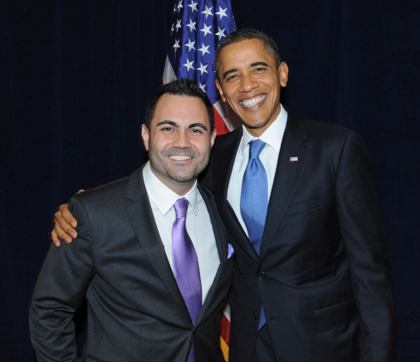 “It is an honor to have been asked to emcee this great event for our President. Please join us in support of a true leader and constant fighter for equality; a man who has real solutions, who has demonstrated that he understands and respects Latinos; a man who has proven to deserve a second term. This is a great opportunity to hear from our President – and to show him some love,” said Santos.

Santos is a strong supporter of The President and of his re-election campaign, which will be the largest ever grassroots mobilization of Latino voters in history. The campaign has already made an unprecedented effort to reach Latino voters on the ground and online through its Spanish website, http://barackobama.com/es, and http://votemostodos.org.

Tickets for the fundraiser are still available online here:http://barackobama.com/MarcAnthonyConcert.
Proceeds from this event will go to the Obama Victory Fund, a joint fundraising committee of Obama for America, the Democratic National Committee and several state Democratic parties.

Santos’ endorsement is personal and does not represent the views of his employer Univision Communications, Inc, or its subsidiaries, affiliates, agents or licensees.

About the Author: susan